WHAT IS A RATIONALE?

A rationale is an exposition where you argue and justify the representational (design) choices you have made on your visual composition. As is always the case with expositions, you should organise your rationale around concepts rather than techniques. Regardless of the medium used to deliver your rationale whether as a speech or a written rationale, the exposition structure remains constant.
EXPOSITION SCAFFOLD
INTRODUCTION
The introduction outlines three main points-
a) it introduces YOUR PURPOSE and situation ie, an advertising pitch for a particular product, a page from a picture book, a new book or DVD cover of the narrative. With many of the English faculty representing tasks the purpose is primarily about PROMOTION- to engage the attention of the target audience, to intrigue/ entice/ arouse curiosity etc. and  to promote the product or film or book.
b) it establishes the audience/ targeted consumer- age, gender, socio-economic group etc
c) it states your THESIS- ie the foundation concept or theme that underlies the text/ visual representation. Once the overall thesis is established, then outline in a LIST SENTENCE the three or so concepts that have guided your use of visual and written language techniques. DONT DISCUSS SPECIFIC TECHNIQUES HERE!

BODY
T- Each paragraph should open with a TOPIC SENTENCE which introduces the conceptual idea
E- Elaborate and build on the idea in relation to your task, audience, product appeal, themes, character etc
E- integrate the evidence, in this case your evidence is the techniques you have used. Detailing of specific visual/ written techniques and use of metalanguage (the technical language of visual literacy and language analysis) should be used extensively here. This is where you demonstrate that you understand how techniques can be used to convey particular ideas and to achieve particular effects.
L- link back to concept and/or purpose and/or audience

CONCLUSION
​summation of the thesis and task. 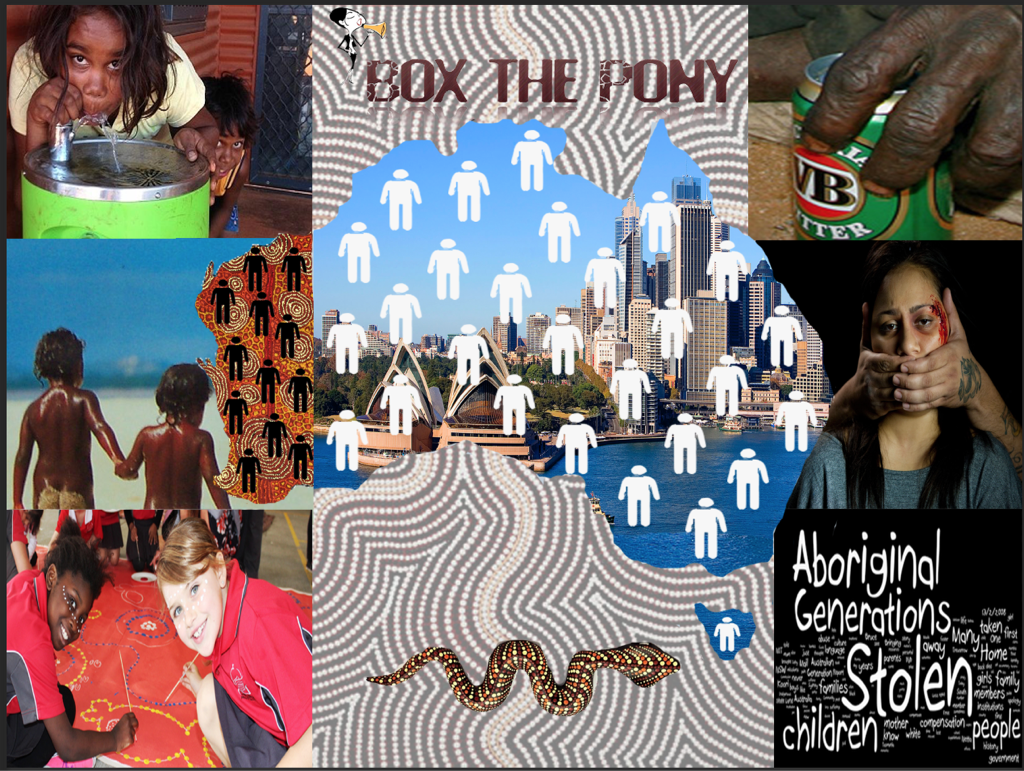 Exemplar rationale - Work in progress
​THIS IS NOT FINISHED YET!

Box the Pony is a one handed play which tells the true story of renowned actress, Leah Purcell. The play is a corroboration between Purcell and writer Scot Rankin, and the culmination of several interviews where Purcell draws upon the formative episodes of her own life to shed light on the injustices and struggles which characterise contemporary Aboriginal experience. Told from the perspective of the fictional character Steff, the play blends honesty and humour, to allow insight into the violence, the dysfunction and social issues which impact Aboriginals. The collage highlights the marginalisation of Australua's indigenous population, forced to live on reserves at the fringes of society and the social dysfunction dispossession and discrimination give rise to. Central to Steff's story is Daisy, a victim of the Stolen Generation, who is also prominent on the collage.

Racial marginalisation is a recurrent theme throughout the play. From the opening address when Leah, as Steff, breaks the fourth wall and anecdotally tells the audience of her first experiences in the city. Her meeting with the racist white woman at the cafe clearly establishes the us and them attitude of many white Australians who treat Aborigines with disdain and discrimination. Shown through the salient image of the map of Australia which represents the inequality which condemns Australua's Indigenous population to the fringes of society. This image placement and design was an effective way to represent the Australian Aboriginals on the left hand side as a minority group within the country, making up 3% of the nations population. With the addition of the dark figures and traditional Aboriginal designs on the background, it allows the viewer to easily associate the native Australians with this focal point. Conversely, the remains of the population is represented on the right-hand side of the map, accompanied with a background of the city of Sydney. This is an indication that the Aboriginals do not predominantly inhabit that land, as described in BTP. he expansive use of the colour blue, both in the play and on the poster represents the Queensland skies above the Aboriginal reserve which is the setting for most of the play and which also links to the Bungabura crane motif which is Steff's personal symbol of Aboriginal spiritualism and flight/ escape.

One can see the title BTP centered at the top of the collage consists of two letters looking cracked. This conveys how Leah’s life is fragile, broken and unstable. The cartoon girl to the left of the title is representative of Leah as she looks confident and is holding a mega indicating she is sharing her knowledge with others in a loud manner. The Aboriginal patterned snake is used as a tool for the reading path; viewers are encouraged to engage with the three photos on the left hand side and then follow the snakes movement and direction towards the images on the right. The snake is also used for the reader to associate the Aboriginals with the earth, showing their heritage.

The three photos on the left are juxtaposing the opposite three on the right as they show the innocent Aboriginal children, and then the grown up, affected and changed adults. This technique is an effective way to highlight the concepts thatare relevant in BTP. The top row addresses the issue of alcohol abuse and the second domestic violence which are both revealed in the play through the portrayal of Florence, Steff’s alcoholic mother. These two concepts are a dominant factor in the time loop of this culture. The third- racial discrimination is represented primarily through Leah’s reflections of her arrival in Sydney and her early experiences of her life in Woollahra.
BELOW IS A SHORT EXEMPLAR RATIONALE WRITTEN FOR THE HSC AREA OF STUDY BELONGING by Bianca Hewes
There isn't a lot of detail or discussion of visual literacy but it shows how it is structured as an exposition and developed on concepts. I think you can do better.

Anxiety about one’s status within a group may result in self-imposed isolation. However, such isolation can facilitate independent thought. I have elected to use a new and evolving text form to represent the aforementioned ideas about belonging – the Google search video. This highly compact visual medium immediately resonates with the viewers because of its brevity and the ubiquitous nature of the Google search.
My understanding that status anxiety causes an individual’s reticence to belong to a group has developed as a result of my close study of Rolf deHeer’s film Ten Canoes, the short story ‘A Clean Well Lighted Place’ by Ernest Hemmingway and the novel The Great Gatsby by F. Scott Fitzgerald. These texts helped me to appreciate that individuals who become frustrated by their desire for status within a group may elect to remove themselves from the group, resulting in an opportunity to reconnect with their own thoughts about the world.
I have tried to represent this understanding of belonging in my representation through the use of humour, music and literary allusion. Humour is evident in the choice of search words used in the representation. The use of the lines ‘How to fit into a group’ and ‘Is being alone a bad thing?’ aim to be humorous as searching these indicate the persona is troubled by feelings of not belonging or perhaps an unwillingness to belong to a group. The background music is designed to be dramatic and builds in intensity to create sympathy for the searching persona who is experiencing conflicting feelings about their status. Finally, the literary allusion to Jack London’s Call of the Wild informs the well-read responder that the persona wishes to exile herself from civilisation just like Buck, the protagonist of London’s novel.
Ultimately, this representation aims to suggest that belonging to a group may not be conducive to independent thought.
Another example, thanks to Bianca Hewes
​Visual representation of the ‘shadow’ concept for Yr 11
Posted on March 24, 2013 Bianca Hewes

Below is a photograph of a diorama I made tonight as a model for my Year 11 advanced English class. They have their visual representations of the shadow concept due this Friday – with a 300 word rationale – and I thought I’d make one as a model to show them how they might be able to do it. Making it and writing the rationale only took me a couple of hours, so I reckon they can ace it even if they leave it until the night before, lol. It’s quite a personal piece, but it was rather cathartic making it and sharing it. My mum will be cool with me sharing it, she’s very open about her experiences and I think this is part of her healing process (and probably mine too). 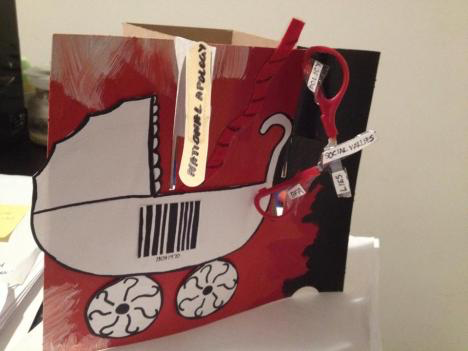 RATIONALE:The process of individuation necessarily involves struggle and trauma as the individual acknowledges the role that social taboos and values have on the evolution of his or her shadow. It is only once the truths hidden in the darkness of the unconscious mind come to light in the conscious mind, that the shadow can be genuinely integrated into the True Self. I have chosen to visually represent this personal understanding of the Shadow through the diorama form. My diorama represents a truly personal inner journey, namely my developing awareness of the truth about my mother’s experience of Forced Adoption and the unconscious impact that this has had on my life.
Symbolism of the question mark and barcode on the baby carriage represents my lack of knowledge regarding my half-brother and intends to provoke similar feelings of confusion in my responder. Contrastingly, the colour symbolism of the background washing from black to red and then to white, aims to inform my responder of my shift from being ignorant of mother’s traumatic past (black) to the embracing of the positive impact this discovery has on my understanding of my self (red then white). Finally, the tactile jutting out of the scissors and Band-Aid from the diorama dramatically illustrate my belief that social taboos and values impact the evolution of an individual’s shadow. The scissors symbolise the cutting of the primitive mother/child bond. I also used key words on the scissors to represent society’s values and taboos in the 1970s such as BFA which stands for ‘baby for adoption’ – the acronym used on paperwork in hospitals that participated in forced adoption. However, the Band-Aid acts to signify a coming to light of the truth through the National Apology for Forced Adoption and the impact this had on my ability to heal through understanding my past.
This diorama, whilst derived from personal experience, prompts the responder to consider their own shadow and how it may be shaped be elements beyond their control, specifically social taboos and values. Whilst bringing our shadow to light is painful, it is a necessary part of our inner journey towards Individuation.